WITH CHIROPRACTIC AND NUTRITION THERAPY WE HAVE YOU COVERED!

An adjustment can significantly reduce your back and neck pain via a non-invasive technique. Chiropractic treatment is also cheaper than other methods of back pain management. You’ll be able to save yourself from both mild and chronic pain while also reducing your medical costs.

Chiropractice Therapies have been known to help with the following:

Chiropractic is an amazingly powerful, all natural healing technique used to restore people to their optimal state of health.

​Nutrition (or sometimes called metabolic) therapy has been shown to provide amazing results. It may involve analyzing blood and other lab work for patterns of dysfunction.

What is Chiropractic Therapy and how does it affect the brain and nervous system?

Chiropractic is an amazingly powerful, all natural healing technique used to restore people to their optimal state of health.

From the earliest days of our college, we focused on the fact that your​​ brain controls and coordinates, either directly or indirectly, all the organs and function of the body (Grey’s Anatomy). When functioning normally, the cerebellum, which is the back bottom part of your brain, sends messages or “fires” to the brain’s right and left hemispheres (the big part) which in turn fires to the brain stem which is made up of the mesencephalon, pons, and medulla. We call this the “Brain Loop”. 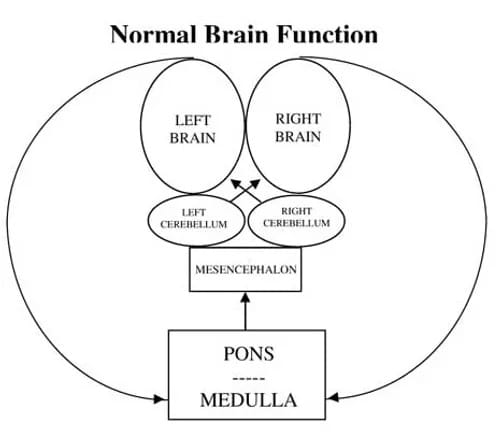 When functioning correctly, the cerebellum receives adequate input, sending normal input to the brains frontal lobes, which sends sufficient input to the lower brainstem, keeping the mesencephalon from over-firing.
​
What goes wrong?
​
Either physical, chemical, or emotional stress can adversely affect this brain loop causing a breakdown in the messages from one part to the next. Many researchers say that some stress from time to time can be a good thing. However, constant unremitting stress causes functional changes in the brain and body. 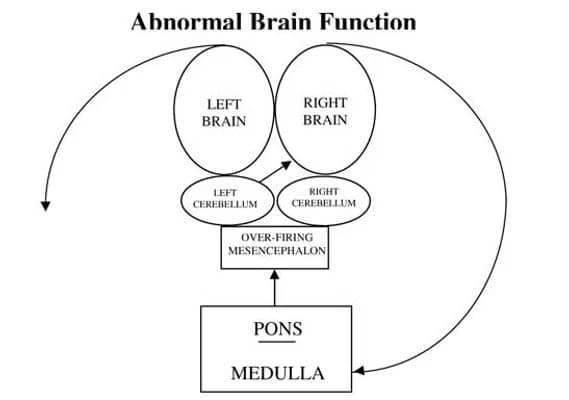 If one side of the cerebellum is not receiving enough nerve input, it will not send adequate output to provide normal frontal lobe input. The frontal lobe in turn will not send enough messages to the lower brainstem to keep it under control and stop it from over-firing.

This area of the lower brainstem is called the mesencephalon which, like some five-year-olds, has to constantly be kept in check. When unrestrained by the frontal lobe, the mesencephalon shifts into the sympathetic (fight or flight) response.

The changes from an over-firing mesencephalon factor into many chronic health problems such as fibromyalgia, ADD, sciatica, etc.​

Located at the lower back part of the brain the cerebellum is another key component in this brain loop. Not only does it receive input from the sensory receptors in the body, it controls balance, coordination, spinal posture muscles and terminates eye movements. An improper firing cerebellum also leads to a variety of common ailments.

A mis-firing cerebellum can cause postural muscles on one side of the body to be tighter or in constant spasm. That causes imbalances in the spine, bones and joints. The vertebra can’t move in their normal range of motion and may result in chronic back or neck pain, spinal degeneration, disc herniations, arthritis, spinal stenosis, sciatica or scoliosis. Although other pathologies need to be ruled out, when it is bad enough some movement disorders, dizziness and balance problems can result.
​

​How do you fix this?

​
A chiropractic examination including neurological tests can reveal an aspect of your brain not firing adequately. Then utilizing proper therapy, the non-firing or low-firing area is gently stimulated. Since one side of the brain controls the other side of the body, most treatments are on one side to stimulate the opposite (side) of the brain.

Treatment is safe, gentle, and hands on, which re-boots, reconnects and restores balanced brain function. Traditional chiropractic adjustments are used along with exercises designed to affect the correct part of the nervous system.

What problems can be helped with this type therapy?

Please understand this is not a cure for any specific disease, Illness, or disorder. This is not a cure but a way of naturally and holistically promoting brain, spine and nervous system function and then allowing the body to function naturally and normally, to heal itself. However, by removing the triggers to bad brain function, and restoring this “brain loop” and balancing the brain, amazing results can occur. Chiropractic and proper nutrition combine to improve symptoms in many conditions. The following are conditions with which people have shown significant improvement.

When I went through school the medical texts said once the brain matures, if something happens, too bad – It doesn’t heal. Now we know that Brain Based Therapy utilizing “neuroplasticity” provides a means of boosting the energy and even re-wiring the brain. The pioneer is restoring brain function without drugs or surgery is Dr. Fredrick Carrick, the country’s leading chiropractic neurologist and neurological fellow. The Carrick Institute offers classes internationally and helps patients around the world with severe neurological disorders.

Additionally, Dr. Michael Johnson, a board certified chiropractic neurologist and author of the book,  What Do You Do When The Medications Don’t Work utilizes and recommends Dr. Carricks’ neurological training and protocols and has developed a Neurological/Metabolic program for chiropractors in the United States who wish to pursue this expensive post-graduate training.  Dr. Johnson, having a diagnosis of MS, uses these protocols to keep the disease in check while maintaining a busy schedule of treating patients and consulting with chiropractors across the country.​

You can hear more of Dr. Johnson’s story at:

Listen to patient testimonials at:

What Is Nutrition Therapy?

​Nutrition (or sometimes called metabolic) therapy has been shown to provide amazing results. It may involve analyzing blood and other lab work for patterns of dysfunction. Also called Functional Metabolic Approach, researchers have narrowed the so-called normal ranges, from what some call pathological ranges, to better reflect a state of health. Metabolic Therapy then involves using specific nutritional treatment determined from this analysis. ​

In other words, treatment is designed to fulfill your needs by using your lab or other test results. By interpreting your previous tests with these methods, and perhaps adding a few particular tests, it is possible to help even chronic conditions. The goal is more energy and vitality, less pain, better sleep, better cholesterol, and more. Simply put, you begin to get your life back.

​​An issue we normally face is that prior tests do not give a complete picture of the overall problem. Tests that have been run are often limited because of insurance restrictions or what is usual and customary. Other are not ordered because there are is no medication to treat the results. While evaluating your previous tests from a functional standpoint, we add to that knowledge by ordering specific studies to give a deeper understanding about why you’ve lost your normal health and vitality. We match those findings with questionnaires about symptoms and history, and with neurological exam findings to determine your best course of treatment. Follow up tests are later performed to confirm your progress.

Here’s another issue. A phrase we commonly hear is “All my tests are normal.” Your results can fall within the laboratory reference range called “normal” and still be unhealthy! By using functional ranges designed for health (not just the laboratory ranges) we can understand if your health is moving in the wrong direction. In some cases the usual tests and usual ranges are normal. If you’re sick, we need to look deeper.

By taking a holistic approach and looking at how different systems react and affect one another, we give specific support to re-balance the whole system. Our concern is less about naming a specific diagnosis for a specific organ and more about helping all the body work together.​

The work we do and the products we use are backed by the latest research. There are hundreds of scientific studies every year that provide us with the latest developments to make the best choices for you. We use this knowledge to get you better.​

By combining this functional approach to nutrition with Chiropractic Therapy we help patients suffering from chronic conditions.

Our practice is dedicated to those who are seeing their health diminish, yet are unable to find answers elsewhere. When people are determined to get better, we provide results. I’ve had referrals from massage therapists, other chiropractic physicians, medical doctors, nurses,  as well as patients, and when patients are actively committed to getting better, they see results.

If you are suffering from a chronic condition such as:

Questions for the Chiropractor? Give us a call or send us a message from our contact us page!